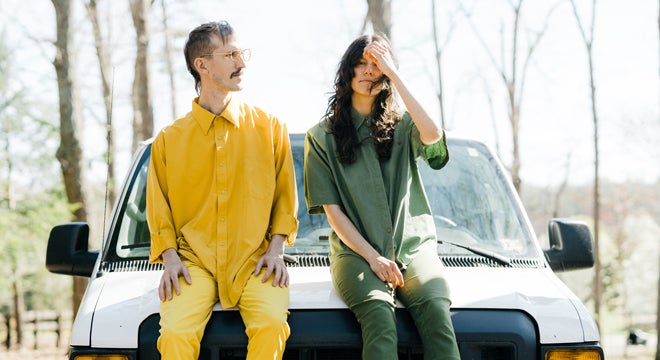 Daniel and Lauren Goans combined their lives when they wed in 2012. They combined their voices and creative habits when they established their distinct sound and formed the band Lowland Hum in 2013. Flash forward eight years and they are making more music than ever, still in their own language of unexampled harmonies and distilled acoustic arrangements.

The two lived the intervening years primarily on the highway, performing across the United States & Europe, sharing stages with Josh Ritter, Jesca Hoop, The Oh Hellos and others along the way.  Self-producing five full length albums and four eps, the prolific duo has garnered ongoing critical acclaim for their minimalist brand of indie folk from NPR, the Washington Post, American Songwriter, Paste, Billboard, No Depression, and the Wall Street Journal. As Robin Hilton of All Songs Considered (NPR) put it, “if you love sublimely beautiful two-part harmonies, you’re not going to do better than this band.”

In 2019 Lowland Hum launched Golden Hour, an immersive listening experience, with co-collaborators David Wax and Suz Slezak of the band David Wax Museum. The experience was featured on World Cafe in early 2020 and while they've had to put their tour plans on hold, the team is eager to resume performances when it is safe to do so.

After all tours and events were cancelled due to coronavirus, the pair spent the past year at their rural homestead outside Charlottesville, Virginia, making the most of their recently finished barn-turned-recording studio. After writing and recording multiple projects their work was abruptly halted when a tornado visited their area and rendered the studio unusable. A long drawn out battle ensued with their insurance company which finally ended in their favor when fans of the band tweeted at State Farm, urging them to do right by their customers. The studio was eventually restored––just in time for them to welcome their first child into the world right before the year's end.

Two months later Lowland Hum jumped back into their studio to embark on an ambitious journey reimagining Peter Gabriel's acclaimed album, So, in its entirety. The band released So Low on May 19, the 35th anniversary of the release of So. On July 30th, the band will release the first single from At Home, an album of original songs written and recorded during quarantine 2020. "Where Are You?" is a song about alienation and love in the digital age. The band looks forward to touring in the fall and continuing to introduce their little one to the ever expanding catalogue of albums that have inspired and kept them going for years.

Though we’ve often pined for a long season at home during our many years on the road, we were a bit blindsided by the realities of home living when we found ourselves quarantined like the rest of the world in the early spring of 2020. We realized very quickly that we were actually quite bad at being at home, having spent the past nine years honing a skill set that made life away from home more livable. It was a clumsy time for us, adjusting to new rhythms that weren’t dictated by driving schedules and showtimes. Slower, unstructured days allowed a whirlwind of suppressed things to rise to the surface. Some days felt brighter than others, but many were shrouded in a mysterious heaviness that was hard to shake. A few months into this season of adjustment we discovered that we were pregnant. It was news that both excited us and brought up a host of questions and uncertainties we’d never before faced. This new family of songs came out of that melting pot of processing and restlessness. In many ways we are still learning how to be at ease in the rhythms of home life, and with our family growing we know that learning and adjusting will only continue to be the new way of things. We look forward to the adventure ahead as the things which we can’t control are often the ones that bring the greatest transformation. 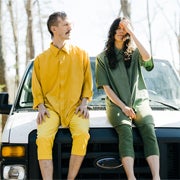