Bryan Elijah Smith is an American singer-songwriter & producer based out of Virginia. “In Through the Dark” appears in a new Netflix series called Virgin River & received a 2020 Independent Music Award Nomination for Best Song – Used in Film/TV. Smith’s latest album, Apocolyptic Blues, was released July 2021 on all streaming platforms & voted #34 on WNRN’s “Top 100 Albums of 2021.”

Gia Ray is a singer-songwriter based out of Charlottesville, Virginia. Gia’s debut album, ‘Bottom Of The Barrel,” was released June 2021 on vinyl & all streaming platforms. 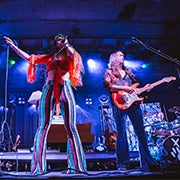