An Evening with Mike Doughty

An Evening with Mike Doughty

This is a partially seated General Admission show.

Mike Doughty, former Soul Coughing frontman, has released 11 albums in the 21st Century, from Haughty Melodic to The Heart Watches While the Brain Burns. His new band, Ghost of Vroom, has put out two albums produced by Mario Caldato Jr, and are finishing a third. Doughty’s biblical oratorio Revelation was staged by WNYC at The Greene Space. Doughty has published two memoirs with Hachette,The Book of Drugs and I Die Each Time I Hear The Sound. He’s posted a new song on his Patreon weekly since 2015 (293 total at this writing). Doughty and Ghost of Vroom did an improvised-music residency in LA in January 2022, and are reprising the residency in Brooklyn this fall. 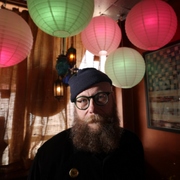