The Dip *SOLD OUT*

The Dip *SOLD OUT*

Hailing from Seattle, The Dip is an electrifying seven-piece ensemble that melds vintage rhythm and blues and modern pop with 60s soul, tapped by KEXP as “one of the most exciting and joyous acts to emerge in recent years”. The group quickly gained notoriety throughout the Pacific Northwest for their eminently danceable live shows that feature vocals from frontman Tom Eddy (Beat Connection), an effortlessly deep pocket, and the melodies of the “The Honeynut Horns”. Hard-hitting but sensitive, The Dip harkens back to the deep soul roots of decades past while sounding undeniably relevant. The band's 2015 self-titled debut, recorded to tape at Avast! Studios, propelled them to notable appearances at Sasquatch! Music Festival, High Sierra Music Fest, Summer Meltdown, and Capitol Hill Block Party and built anticipation for their 2016 release, Won’t Be Coming Back (EP).Now, the band prepares to arrive on the national stage with their second LP, The Dip Delivers.There’s a certain alchemy to The Dip that unites music fans of all ages and backgrounds and leaves everyone smiling ear to ear.

The BLNDRS are a psychedelic rock band from Central Virginia. The four-piece rock outfit has been playing unforgivingly honest and original rock'n'roll since 2015, and has nurtured an impressive regional following. The group is best known for their creative and dynamic grooves and their unpredictable improvisation, but The BLNDRS have also come to be known for the culture of friendship, intimacy, and positivity that the band of friends exude, both on and offstage. Their self-titled EP was released in 2017, and have played over 100 shows since its debut.

Alice, Nate, Tommy, and Ben all are songwriters, multi-instrumentalists, and vocalists in the band and in their personal projects. While you will undoubtedly see Ben behind the drums, Tommy playing bass, and Nate and Alice on guitar at any given show, this is in no way the limit of The BLNDRS. Consisting of four best friends, two twin brothers, and a couple, The BLNDRS have carved out their own universe of fun and friendship through the language of music. The four musicians grew up together, and have struggled and overcome together. This is evident in their collective presence, and the joy emanating from the stage along with the music.

The BLNDRS released their single, "Ends Where It Begins" in the spring of 2019 in anticipation of their upcoming full-length album to be released in the fall of 2019. They have made countless appearances at venues across Virginia and North Carolina at the Southern Cafe & Music Hall, The Camel, Misty Mountain Music Festival, Epicure Cafe, Gaffer's Pub, and the Juggling Gypsy Cafe, and have opened for several nationally touring acts such as The Jauntee, The Bumpin' Uglies, Choose Your Own Adventure, and Free Union.

The BLNDRS recently launched a side project in the fall of 2018 called The Chain Gang: The BLNDRS as the Pretenders. They have since performed several shows as The Chain Gang, even opening for Southern Accents: A Tribute to Tom Petty at the Jefferson Theater in downtown Charlottesville. 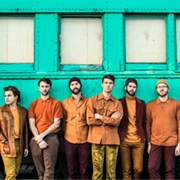