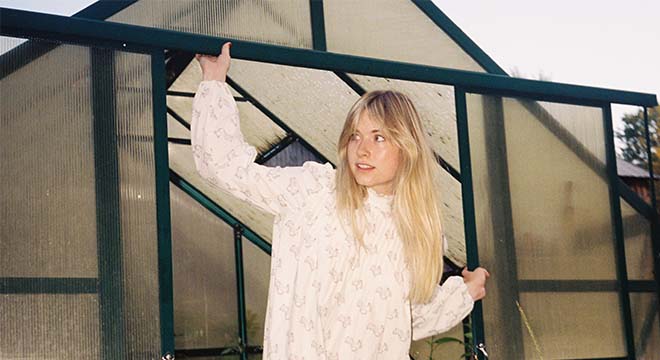 Kate Bollinger’s songs tend to linger well beyond their run times, filling the negative space of ordinary days with charming melodies and smart phrasings. She writes them at home in Richmond, Virginia, letting her subconscious lead, an open-ended process she likens to dreaming. From a chord progression appears a line, maybe a syllable will start to stick, enough to pursue, but she says sometimes the words don’t feel like her own, more like shapes that form in the mind’s sky. While many are personal and deal with the emotions that surface with finding her place in the world, she’d prefer they be whatever you’d like them to be, to connect with listeners in their own way. Bollinger’s musical universe is relaxed, tender, and unassuming; within lives a timeless sensibility, a songwriter’s knack for noticing the little things and their counterpoints. Darkness and light, pain and pleasure, reality and escape. These all have space to be seen on her new EP, Look at it in the Light, her first project on Ghostly International, arriving in spring 2022.

Bollinger’s project is collaborative; she shoots music videos with her friends and colors each of her folk-pop songs with musicians in her community. An agile group of players with backgrounds in jazz, they recorded her first EP, I Don’t Wanna Lose, as live takes in a single day, then slowed it down to build out her 2020 EP, A word becomes a sound. Bollinger sings quickly at times; she jokes that can get her into trouble when it comes to playing live, “some of these songs are going to be a mouthful.” She’s always been drawn to singers in that free-flowing style and got into the habit of writing quickly while watching her longtime collaborator John Trainum work with rappers in the studio.

Forced to finish her last EP in lockdown, Bollinger, Trainum, and players excitedly returned to sessions in the spring of 2021 to explore a new batch of songs. The parameters were different this time, Bollinger explains, “We wanted to make limiting decisions and to stick with them, rather than leave things open, and we wanted to hear certain flaws and parts of the process.” Inspired by the music of the ‘60s and ‘70s, particularly a lot of the old Beatles demos, they focused on the orientation and clarity of sound. “I like being able to hear the bass, the guitar, the drums, the keys, and for each instrument to be playing a singular part that is good enough to stand alone.”

That clarity carries over into EP’s themes; the title Look at it in the Light is a reference to the aspects of Bollinger’s life that she knows need examining. For one, there’s her persistent resistance to change — she chooses to ignore it on the title track (“I try not to notice / I deny my fate”), as wiry strums sync with crisp drums. She surrenders to comfort on “Who Am I But Someone,” a light and softly psychedelic number that shuffles through “the measures to which I will go in order to avoid having to uproot the familiar things in my life.” Bollinger recorded the demo with Trainum and guitarist Chris Lewis in their shared month-to-month storage space, building on a composition she had written alone, later completing it in the studio with the full band. Together they came up with the sharp turn at the track’s midway point — a sudden shift in a song about staying the same. Therein lies the appeal of Bollinger’s music, the clever twists beneath the sweetness.

“Yards / Gardens” finds Bollinger in full swing, skipping verses of uncertainty above a bright and nimble bassline and kick. Guitar riffs unravel across the bridge, trailing her lines like ellipses. Growing up has become a motif in her work, but she’s never sidestepped the concept in quite this way. Here, self-assured and surrounded by vivid production, she leans back in the grass, letting expectations breeze by, reminding herself she’ll tend to things in good time (“I’m viewing days like practice rounds / come next year, I’ll know what to do”).

The string-backed “Lady in the Darkest Hour” is the set’s most luxuriant statement, recorded during a session at Matthew E. White’s Spacebomb Studios with in-house arranger Trey Pollard (Natalie Prass, Helado Negro). Here her lines ring bittersweet yet reassuring, uplifted by swells of golden-hued instrumentation. Searching for meaning (“Cause what I’d like to know / Is this it?”), Bollinger mirrors her subject in beaming delivery (“smile all sweet like it isn’t sour”), curving the words atop the rhythm and melody.

From the hushed abstractions of “I Found Out” to the biting suspicions of closer “Connecting Dots,” Kate Bollinger uses every inch of this dazzling EP to find her footing amidst the ever-present sways of life.

It is the simple thing that is so hard to do. This is the paradox that musician Lael Neale has lived within throughout her development as an artist. It is the reason she became enthralled with poetry. Poems are a distillation. Lael says, “this challenge to winnow away what is unessential is the most maddening and, ultimately, rewarding part of writing a song.”

Lael’s new album Acquainted with Night is a testament to this poetic devotion. Stripped of any extraneous word or sound, the songs are lit by Lael’s crystalline voice which lays on a lush bed of Omnichord. The collection touches on themes that have been thread into her work for years: isolation, mortality, yearning, and reaching ever toward the transcendent experience.

Lael grew up on a farm in rural Virginia, but for nearly 10 years called Los Angeles home.  Those years were spent developing her songwriting and performing in venues across the city, but the right way to record the songs proved more elusive. She worked with countless 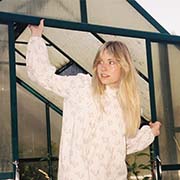