This performance is SOLD OUT

With her spellbinding voice and time-bending sensibilities, Sierra Ferrell makes music that’s as fantastically vagabond as the artist herself. Growing up in small-town West Virginia, the singer/songwriter/multi-instrumentalist left home in her early 20s to journey across the country with a troupe of nomadic musicians, playing everywhere from truck stops to alleyways to freight-train boxcars speeding down the railroad tracks. After years of living in her van and busking on the streets of New Orleans and Seattle, she moved to Nashville and soon landed a deal with Rounder Records on the strength of her magnetic live show. Now, on her highly anticipated label debut Long Time Coming, Ferrells hares a dozen songs beautifully unbound by genre or era, instantly transporting her audience to an infinitely more enchanted world.

Co-produced by Stu Hibberd and10-time Grammy Award-winner Gary Paczosa (Alison Krauss, Dolly Parton, Gillian Welch), Long Time Coming embodies a delicate eclecticism fitting for a musician who utterly defies categorization. “I want my music to be like my mind is—all over the place,” says Ferrell, who recorded the album at Southern Ground and Minutia studios in Nashville.“I listen to everything from bluegrass to techno to goth metal, and it all inspires me in different ways that I try to incorporate into my songs and make people really feel something.”In sculpting the album’s chameleonic sound, Ferrell joined forces with a knock out lineup of guest musicians (including Jerry Douglas, Tim O'Brien, Chris Scruggs, Sarah Jarosz, Billy Strings, and Dennis Crouch), adding entirely new texture to each of her gracefully crafted and undeniably heartfelt songs. 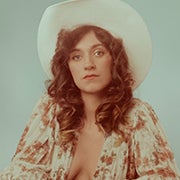