About The Rondo Rigs:

The Rondo Rigs play music, all the time. Whether it’s Country Songs, Fiddle Tunes, Rock and Roll or Greasy Southern Blues and Funk, it’s all about that infectious energy that keeps listeners intrigued and on their toes. It’s not uncommon for shows to include jams pre and post, and you are invited to come along as they morph from song to song, instrument to instrument, acoustic to electric, and street to stage. With three singers and multi-instrumentalists The Rondo Rigs brand of a uniquely Supercharged Americana boasts original songwriting that has been woven with sharp-witted lyrics, and danceable melodies that will keep you singing and shaking all night.

The Rondo Rigs will be releasing their full-length debut album, produced by Oliver Wood (The Wood Brothers) in March 2016. We hope that you will follow us through this exciting process and can’t wait to share this new music.

I believe that music is magic, and everybody needs it.
Here’s what you ought to know about me. First off, I love songs. I love pop songs, folk songs, jazz, soul, and rock songs. I write whatever kind of song gets my point across most clearly. My point, usually, is about the miraculous, ridiculous, confusing joy of being alive.

I love American pop music from every decade (Louis Armstrong to Beyonce), any folk music with guts (Nick Lowe, Patty Griffin), and just about anything that swings, grooves, or rocks (Billie Holiday, The Band, Donny Hathaway, Elvis Costello). Contenders for my favorite song of all time include "Do You Know What it Means to Miss New Orleans?", "Suzanne", and "F**k You".

I believe that music is magic, and everybody needs it. That’s why I give mine away.

I live in a pink house in New Orleans. I’ve got two dogs and a studio out back called The Watermelon. I grew up on a defunct cattle farm in Luray, Virginia. At sixteen I fled the coop to Eugene, Oregon. I cut my musical teeth in Philadelphia. I’ve played shows in most of North America and Europe, and soon, Australia. I’ve toured with Paul Simon, The Wood Brothers, and The Weepies. I ran a crazy-successful Kickstarter campaign. I’m an unschooler, a sex blogger, and a Lindy Hopper. I find four-leaf-clovers.

If I died, and somebody came up to me in the afterlife and said, “What were the best parts?”, I’d have to say songs, sex, creativity, raw oysters, bravery, small children, and the feeling you get when somebody is utterly in tune with you, like the same spirit is kissing both your faces. 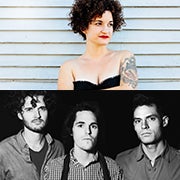