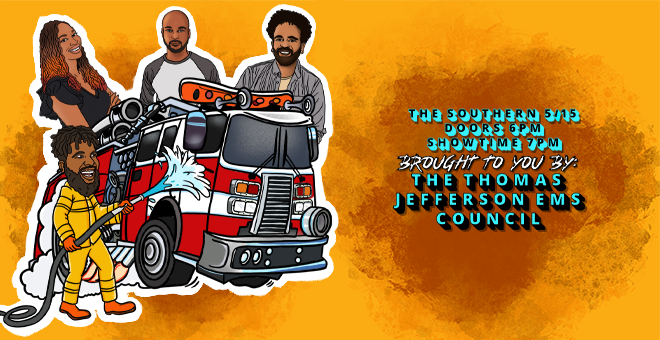 TJEMS is a non-profit, tax-exempt organization. It is an integral part of the EMS system whose function is to assess, identify, coordinate, plan and implement an efficient and effective regional EMS delivery system in partnership with the Virginia Office of EMS and the Virginia EMS Advisory Board. They provide a wide range of services and programs that support our region's first responders as well as help them provide quality patient care. 100% of the donation will be going to the charity. Learn more at www.tjems.org

Chris Alan  is a stand up comedian and writer. Chris' conversational yet laid back style coupled with his quick wit keeps audiences on their toes. He's performed at Rogue Island Comedy festival, DC Underground Festival, among others. He's appeared on Laughs on Fox. He hosts a podcast called Negro Please Radio. He's currently touring clubs and venues across the country.

Comedian Jessica Liz runs a monthly showcase in the Hampton Roads area and is currently available for booking!

About TJ Ferguson:
Based in Washington D.C., T.J. has performed up and down the east coast opening for comedians including Todd Barry, Fortune Feimster, and Alonzo Bodden among others. He has been an officially selected performer at the 42nd annual San Francisco Comedy Competition, Underground Comedy Festival, Cape Fear Comedy Festival, Cream City Comedy Festival, Pittsburgh Comedy Festival, and Oak City Comedy Festival. Laced with quick wit and a unique perspective, he tackles topics ranging from dating apps to police brutality. TJ is excited to be taping his debut special “Overdue” at the DC Comedy Loft.

Tim D. Miller is a master at engaging audiences and crafting a stand-up set that is a guaranteed good time for all. Tim’s material is based on his life experience from Waco to the White House, trying to raise a daughter, and his unique ability to find the funny in everyday life.

Tim started doing stand-up after eight years in the U.S. Army (you’re welcome) and working as a videographer at the White House. His stage presence, combined with his charm, have garnished him rave reviews. He also produces the comedy show “Who’s In Here?”- a popular weekly D.C. social event where the crowd is literally part of the show.

Tim has shared the stage with some of the best in the comedy universe, including Dave Attell, Jake Johannsen, Bert Kreischer, Jon Lovitz, Pablo Francisco, Joe Matarese, Bob Marley, Red Grant, Finesse Mitchell, and Daniel Tosh. He has been featured at the 202 Comedy Fest, S.C. Comedy Competition, Laugh Your Asheville Off Comedy Festival, and Laughing Skull Comedy Festival.  Tim has been seen on TruTV (Laff Tracks w/ Cipher Sounds) and PBS (The Truth About Money). He can be heard on his debut album “Rule of Thirds” and regularly on the “Three Guys On” Podcast and Sirius XM radio. 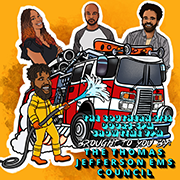