with Sally Rose and Deau Eyes Welcomed by 106.1 The Corner

"Erin Lunsford is a singer-songwriter from Fincastle, Virginia who releases music both on her own and as the frontwoman of Richmond-based band Erin & The Wildfire. Her Tiny Desk Contest entry, "Don't Leave Me in the Dark," starts off with a charming blooper – but don't let the goofiness fool you. The song is a tale of heartbreak and missed connection that shows off her impressive, expressive voice and some serious guitar chops."  — Marissa Lorusso, NPR Music

Erin Lunsford uncovers the beauty of simplicity in her [Tiny Desk] entry video for "What The Fire Is Made Of." The bluesy chord progression in waltz time gives the tune a country feel while Lunsford shows off her mesmerizing voice and fantastic vocal technique. Her clever lyrics warn listeners to respect the seemingly small sparks of love since they can erupt into fire. —Clara Maurer, NPR Music, 2019

"The jam reached its peak when Erin Lunsford (of Erin & the Wildfire) howled into the heavens during “Country Roads." -Garret Woodward, Rolling Stone, 2019

“In a nutshell, Erin Lunsford's vocals are the best around in her genre. She sang with national artists at Floydfest and all but blew them away in my opinion.” Another panelist says, “She has the greatest chance of any recognition because Erin is an outstanding vocalist with a three-octave range, and she is a great songwriter, performing and recording all of her own song material.” - The Roanoker

Erin Lunsford is an award-winning singer and songwriter originally from Fincastle, Va and now living in Richmond, Va. Erin’s compositions, which include self-styled guitar, banjo, and keyboard melodies, are sure to please. She is the powerhouse front-woman of Richmond funk/soul band Erin & The Wildfire, who appeared on the main stage at LOCKN 2018 and 2014 as well as LOCKNWOOD 2015 opening for the late Leon Russell. Charlottesville’s Paramount Idol voted Erin their top voice in 2013, winning the competition with comments from the panel like “perfect intonation.” She won 1st Place at Rapunzel's 11th Annual Songwriting Contest and several other awards have followed.

In 2019, Erin was a featured performer at FloydFest's annual Buffalo Mountain Jam. She sang alongside Keller Williams and Leftover Salmon and Rolling Stone Country said, "The jam reached its peak when Erin Lunsford (of Erin & the Wildfire) howled into the heavens during “Country Roads." Her band Erin & The Wildfire opened for Marcus King Band, Sister Sparrow & The Dirty Birds, and The Dip in 2019 tours.

In 2018, Erin opened for Darrell Scott and Love Canon. In 2017, she supported Bruce Hornsby, Carbon Leaf, Love Canon, and performed with the Grammy-award winning newgrass band The Infamous Stringdusters. Erin has performed with Keller Williams, Leftover Salmon, Pimps of Joytime, and the T Sisters in FloydFest 2015, 2018, and 2019 Buffalo Mountain Jam. Erin has also opened for The Village People, Leon Russel, Mingo Fishtrap, Turkuaz, and Jon Pardi in recent performances. 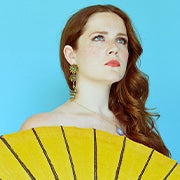