About Erin & The Wildfire:

Erin & The Wildfire is a Charlottesville-based funk and soul band that has been steadily carving out a reputation for themselves in recent years as one of the most captivating live acts to come out of Central Virginia since their formation in 2012. Fronted by powerhouse vocalist and Fincastle native Erin Lunsford, the band has been making waves throughout Virginia stirring up their unique sonic melting pot of rock, soul, and funk. The group's striking sound, goofy charm, and relentless work ethic has propelled them to some of the Commonwealth's biggest stages, including main stage spots at Roosterwalk and Lockn Festival, as well as back-to-back appearances at Floydfest and Festy Experience. 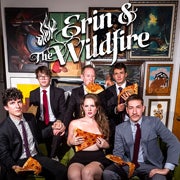