with Spudnik and Grebes To Benefit City of Promise

The history behind the collective’s name gives context to its message. Free Union, Virginia—originally named Nicksville after a free African American blacksmith—sought to unite people of all races at a time when the country was inherently divided. These principles of inclusivity are the underpinnings of this collective. Free Union brings people, musical styles, and ideas together to inspire a message of unity. You will get that sense from lyrics like If I could push a bit more, maybe we’d come out as equal. ‘Cause love is not dead; it’s just missing all of the people (“Good Day to Cry”).

Free Union’s goal is to deliver good music that is a true representation of its members and where they come from. For that reason, the collective’s sound is not distillable. Its ever-evolving music is rooted in soul and incorporates rhythm and blues, rock, and pop into its sound. The hope, according to its front man, is that “when you hear it, when you feel it, you won’t be able to keep from moving” and that “you’ll wake up the next day with it still in your mind.” The music will move your body and your heart; it will keep you thinking about what it will be like to one day have it all in the free world (“Free World”). 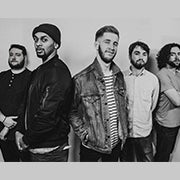