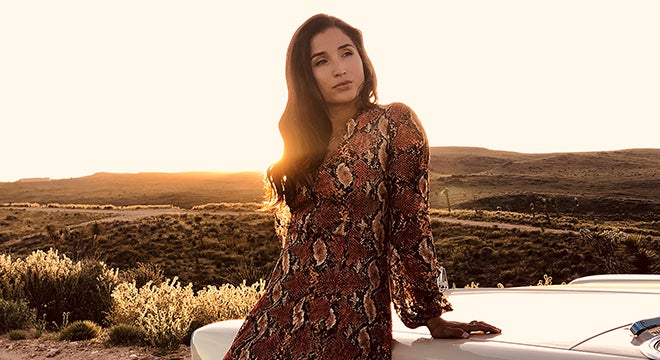 Her first album, 2017’s Gilded, was a masterful, critically acclaimed introduction to her strong soulful stylings as told through the eyes of characters and storytelling, with Jackson keeping any hyper-personal glimpses at arm’s length. But for its follow-up, the singer-songwriter from the Central Coast of California decided to embrace the concept of “writing what you know” and build her songs from an autobiographical perspective. And while the subject matter of Wilderness isn’t necessarily directly drawn from it, Jackson found that revisiting some of the darkness surrounding an accident she experienced in 2012 and its aftermath helped open the door to further self-reflection.

Two days after her 20th birthday, while a first-semester student at CalArts college in Santa Clarita, Jackson was hiking in nearby Sand Canyon when she leaped from a rope swing and fell 15 feet onto a rock. She sustained serious injuries, from shattered vertebrae and slipped discs to a ruptured coccyx, and was not sure if she’d be able to walk again. An allergy to medication in the hospital gave her seizures, and when she was eventually discharged, she was forced to live in a hotel while wearing a back brace and using a wheelchair due to her dormitory’s inability to accommodate her needs. She realized she was depending more and more on the painkillers she was prescribed and after stopping cold turkey by destroying her prescription refills and flushing the remaining pills, her body and brain spiraled into depression. She also developed a control-related eating disorder that would haunt her for several years following. Jackson refers to her mind state during that time as “suicidal.”

“Needless to say, for the first time since I had written my very first song, I didn’t believe in my music anymore,” Jackson says. “Because of my depression I didn’t like myself, so I couldn’t possibly imagine someone else liking what I created. But even that couldn’t stop me from writing, and songwriting remained my therapy through it all.”

Jackson began jamming with some musicians in her home neighborhood in Santa Margarita while on a break from school about a year later. She felt comfortable, as she had already built a small following and familiarity with the area’s venues in years prior, and slowly regained her musical confidence. The story from here and through the release of Gilded is better known, but Jackson has never before spoken in detail about her accident. In doing so, she hopes to inspire others with her story, and takes particular courage from the way she learned to navigate through those unknown, murky days and nights.

The theme of her new work deals heavily with those attitudes and feelings while focusing largely on other true encounters and relationships in her real life. Wilderness is a powerhouse of a record about the in-betweens and stepping stones we dwell in and leap across while coming to terms with our senses of self, and how melancholy can be a powerful weapon to wield—especially in the form of a roots-rock or country song. While some tunes are less hopeful than others and some contain brighter glimmers of light, Jackson has chosen to heal herself through this raw, pure approach, finding comfort in her own skin and spending less time in the observational spaces of her past work. In doing so, she is able to share and connect even more directly with her audience and in turn feels that therapeutic relief like a reward, similar to the lifting of a burden when shared or a secret when told. And all the while her compass needle remains pointed straight ahead, empowered by the means through which she has climbed, grown, and changed.

“Wilderness as the title of my album is this in-between area I’m in right now as a musician. It’s the unknown—like when we’re touring, you don’t know where you’re gonna play, or sleep, what you’re gonna eat, if you’ll have monitors…there’s so much unknown at this grinding stage in the game. I am incredibly thankful for the way my career has started, but I’ve always had this urge propelling me forward. I know where I want to go—I can visualize it—but right now I’m walking through the wild, still picking up tools, still learning, and making my way.”

Wilderness, like Gilded, was produced by Mike Ness, the SoCal punk rock legend who essentially plucked Jackson from obscurity several years ago and helped hone her craft and sound. Jackson calls Ness “a master of feel and rhythm” and credits him with showing her how to invoke more of those calling cards in her new work, in addition to those countless tools now in her arsenal that they developed together over time. As the pair’s working relationship continues to evolve, Jackson recognizes that Ness has become more open to her input while she herself has gotten more hands-on in the studio, a process that ultimately resulted in delivering the sound for which both parties were striving.

“I think for the first album I couldn’t even believe I was there, but this time I had more of an idea of what I wanted, so it was more collaborative,” Jackson says. “Mike and I had the time to feel each other out and see what worked for us both, and the bond only got tighter. He is patient and kind. The more I learn, the more comfortable I feel raising my hand to ask better questions.”

Having filled notebooks with her words since as long as she can remember being able to hold a pencil, Jackson’s writing style is more akin to a never-dry fount than a measured bolt-from-the-blue, and the hardest part of the album’s early process was in selecting the best tunes to record from her mountain of material. As the touring cycle for Gilded ended in the fall of 2018, she and Ness were given the chance to enter the studio sooner than expected, a prospect they relished in order to help them maintain creative momentum. Although already armed with a grip of near-finished songs, Ness encouraged Jackson to keep pushing herself. The result was the last-minute addition of a few lightning-strike inspirations, something Jackson had never experienced.

“I had all the songs ready, but I felt encouraged to see if I could come up with something greater, like, ‘Is there something supposed to be on this album that isn’t alive yet?’” she says. “My creative wheels were spinning. One morning I was driving and a melody came in my head so I recorded it on my phone and sent it to Mike, and he was convinced it had to be on the album. That happened with a couple different ideas, and because they were so fresh and in the moment we knew we had to include them.”

There is another integral Ness in the picture as well, as Mike’s son Julian Ness recently joined Jackson’s band as lead guitarist where he plays alongside her longtime rhythm section of Jake Vukovich and Tyler Miller. She credits this constant swarm of male energy with helping to thicken her skin, and she has learned to shuck any shame or sensitivity that used to accompany her strong sense of empathy while recognizing the freedom that comes from maintaining healthy self-care and a singular focus on what she is trying to accomplish with her songs.

From Wilderness’s opening blast “Bottle It Up” to its closing whisper, “Secret,” it’s clear that Jackson’s music delivers on multiple powerful levels. Written to the beat of her own feet’s pace while jogging, the opener is a standout upbeat number that reveals Jackson’s ability to be deep and breezy all at once. The twangy guitar and whip-smart backbeat propel the tune and the album that follows with ease and tarnished grace. One of “Bottle It Up”’s subjects appears again in the title and tale of “Loneliness,” a slow-burning, tender ballad about Jackson’s own heartrending battle with those feelings.   “The first five years of my 20’s were really lonely,” she says. “In college I was shy, and my accident had distanced me from the rest of the kids. I would go to concerts just so somebody would rub up on my arm as they walked by so I could get some type of human connection. I was starved for it. Loneliness was always on my mind and in my soul, and when that song came to me, I started thinking about all the different people who are lonely—it can surround any situation if you let it in. The idea that you don’t have to be alone to feel lonely birthed that song, and the music reflects that vibe.”

But on an album filled with touching moments and honest plunges into personal experience, perhaps the most profound encounter comes from its final breath. “Secret,” the song that came to Jackson while driving, tells a story of addiction, loss, and the heartbreak that accompanies not just death itself but of a failure to fulfill dreams and to escape the tethers of home. As Jackson’s gorgeous voice belts out the chorus of “All the walls inside me fell down/ I don’t want my bones to be buried in this town,” know that the emotion, just like the story, is real. “That chorus came to my mind first,” she says, “and I started screaming it, like I was channeling the person in that song. A lot of little feelings that hurt me, or that I have suppressed, sometimes pop up when I sing. If you push a buoy down in the water then let go, it shoots up quickly. Sometimes that happens with sadness in my songwriting.”

Whether holding down the buoy of your feelings or holding up a mirror to your life, self-examination and reflection is no easy undertaking, especially when mining your darkest moments for material to put into song. With Wilderness, Jade Jackson has braved the depths of her soul and figured out a course for survival—though she will be the first to admit that her journey still has miles to go.

“The message of ‘Wilderness’ is in how to get through all those tough situations—if you visualize yourself somewhere, all that good energy and intention can get you where you want to be. That doesn’t happen if you have doubt or fear; in the wilderness, it’ll get you eaten by a lion. So you have to figure out how to get through it. There are always solutions if you’re open to them.” 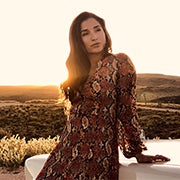