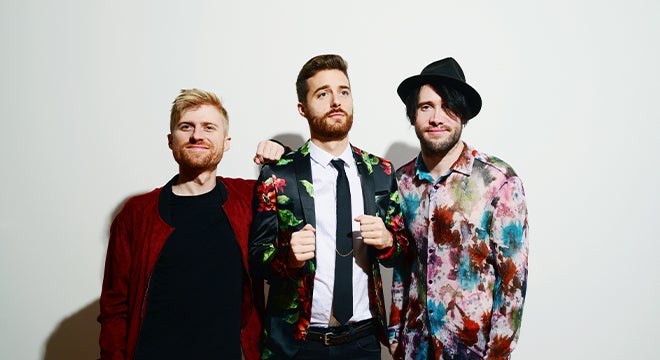 About Jukebox The Ghost:

Jukebox the Ghost's latest record, Off To The Races is a giddy, vibrant collection of Jukebox the Ghost's most bombastic, colorful songs to date. Though it's the fifth studio outing from this long-running trio of piano pop wizards, it plays like an energetic debut album: Just as eager to please as it is eager to surprise you. Every generation has a band that puts a fresh twist on piano-rock, and Jukebox the Ghost’s latest studio offering serves as a memorably vivid and kaleidoscopic step forward for the genre.

Off To The Races is their fifth studio outing, mostly recorded at Studio G in Brooklyn and engineered, produced and mixed by Chris Cubeta and Gary Atturio (two exceptions: “Everybody’s Lonely” was produced by CJ Baran and Peter Thomas and “Fred Astaire” was produced by Chris Wallace). Longtime fans will hear little bits of past Jukebox the Ghost embedded in the record blanketed in a fresh, more colorful sonic palette. The flamboyance and quirkiness of Let Live and Let Ghosts (2008), the retro sensibility of Everything Under the Sun (2010), the concise modern pop smarts of their recent self-titled album (2014) and Safe Travels (2012) and the raw live energy of their live album Long Way Home (2016) are all on full display if you listen closely.

The album is the result of a three-year songwriting and recording process, culled from dozens of demos that the band brought to the table. Recording in their home base of Brooklyn enabled them to do more outside-the-computer sonic experimentation and live performance than past records have afforded. “In ‘Boring’ we sent Tommy’s backing harmonies through a distorting rotary speaker which created this totally weird underwater sound,” explained Jesse Kristin. “And for ‘See You Soon’ we ran an electronic tabla machine through an amplifier and then I played drums along with it. That’s the sort of thing I think we wouldn’t have spent the time to do on our other records.”

Jukebox the Ghost formed in college in 2006 and has been a steadily growing cult favorite and a globally touring band ever since. Composed of Ben Thornewill (piano/vocals), Tommy Siegel (guitar/bass/vocals) and Jesse Kristin (drums/vocals), they have played over 1,000 shows across the country and around the world over the course of their career. In addition to countless headlining tours, they have also toured as openers alongside Ingrid Michaelson, Ben Folds, Guster, Motion City Soundtrack, A Great Big World and Jack’s Mannequin, among others. In addition to festivals like Lollapalooza, Outside Lands, Bonnaroo, and Bottlerock, Jukebox the Ghost has also performed on The Late Show with David Letterman and Conan. Their 2018 national headlining tour will take them to their largest headlining venues to date across April and May.

The Elwins -- singer/guitarist Matt Sweeney, drummer Travis Stokl, guitarist/keyboardist Feurd, and bassist/singer Francesco Figliomeni -- came together in 2006 near Newmarket, about an hour north of Toronto. After touring extensively behind 2012's And I Thank You and 2015's Play for Keeps, the four members developed a natural chemistry, which continues to propel (and challenge) their collaborative spirit on Beauty Community. Play For Keeps notably helped garner the band a 2016 JUNO Award for Breakthrough Group of the Year with its first single, "So Down Low," which amassed over 25 million audience impressions, peaked at #12 Alternative Rock, and was featured in a Canada-wide advertising campaign for Fido. 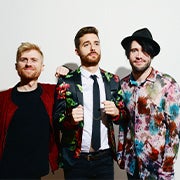