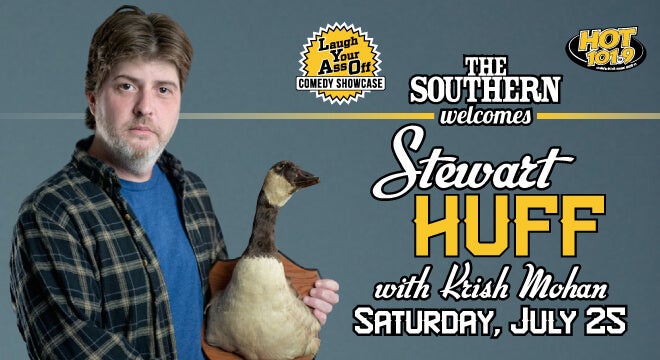 with Krish Mohan and Host Brooks Hoover - presented by Hot 101.9

DINE AND SKIP THE LINE :: Those who dine at The Southern before the show will be allowed early entry into the venue for best choice of seating! One early entry pass valid for one seat will be given per meal purchased. Limited to the first 30 patrons. The restaurant opens for dinner at 7 PM, show starts at 9 pm.

The Laugh Your Ass Off Comedy Showcase is a recurring series featuring the very best up and coming stand up comedy talent on the East Coast. Join us as we grow the Charlottesville comedy scene!

About Stewart Huff:  Stewart Huff was born in Campbellsville, Kentucky and grew up in Knoxville, Tennessee. He has been performing comedy for over 15 years, beginning when he decided to drop out of college to become a writer. Currently touring theatres, comedy clubs and special events across the country, Huff reaches past the norm for his genuine — and genuinely unexpected — comedy. His knack for embracing the foibles of humanity and his refreshing originality make him as likeable as he is hilarious. A storyteller at heart, Huff continues to amaze with his clever material and personal wit.

Huff has performed in comedy clubs nationally and internationally, including the Improv in Los Angeles and New York, the Punchline in Atlanta and the Funny Bone in Omaha, as well as countless others.

A finalist in the 2006 Boston Comedy Festival, Huff was also invited to perform in the HBO Las Vegas Festival, where his act can be viewed on pay-per-view.

He currently lives in Atlanta, Georgia with his girlfriend. There he drops off the various items he collects while on the road, including an antique barber chair, countless vintage photographs, and an extensive collection of LP’s. She likes this.

He is featured in the documentary Road Comics: Big Work on Small Stages, which was released in Fall 2009. 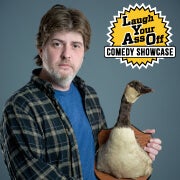