with Jamie McLean and Peter Aristone

Marc Broussard is an artist with a unique gift of channeling the spirits of classic R&B, rock and soul into contemporary terms. This gift has been a matter of common knowledge since 2002, when Broussard released his debut album, Momentary Setback, which he recorded and released independently at age 20. It was no secret before then, going back to those lucky witnesses who heard him belt "Johnny B. Goode" onstage at age 5 while sitting in with his father's band.  Throughout his life, Broussard has been tapped as a talent to watch.

Marc’s song “Home” was successful at radio and catapulted him onto the national touring stage.  His music has been placed in many TV shows and movies.  The timeless, soulful nature of Marc’s vocal lends well to Film and TV, and will continue to do so for years to come.

Jamie McLean Band is set to release their long awaited new album One and Only on February 23rd. Recorded at the famed Sound Emporium studios in Nashville One and Only captures the band's strongest songwriting to date. The album was produced by Ken Coomer of Wilco and features special guests Sam Bush and Jeff Coffin of Dave Matthews Band. Live staples "Virginia" and "One and Only" finally get a beautiful studio performance and Jamie McLean Band will tour behind their new album throughout the US and Canada this year!

Don’t miss their amazing live set when they roll into a town near you!

"McLean and company ooze drops of southern roots rock, blues, R&B, funk and soul out of every note... the rock & roll swagger of the Rolling Stones combined with the songwriting prowess of Ryan Adams."- Jambase

“Jamie McLean Band is completely original and completely fabulous... The live version of this band is a three-dimensional experience not to be missed” – Hittin The Note

“A honkin' collection of Southern-style blues rock, Americana, and soul.... as bawdy as anything the Black Crowes tried to snag from The Faces or The Stones circa 'Sticky Fingers' and 'Exile on Main Street' and as groovy and gutsy as Bowie's 'Young Americans.'" - Charleston City Paper 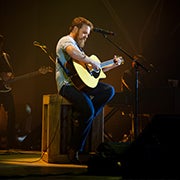