About Peter More:
You may have caught Austin-based Peter More’s music produced by Steely Dan’s Donald Fagen, on tour with Grace Potter, or supporting Leon Bridges in their hometown of Fort Worth, Texas.  At turns contemplative and rousing, More’s music is precisely executed, yet manages to feel original and uncomplicated; Music you want to hum along with and also hang on to every single line.  When you listen closely to “Beautiful Disrepair,” More’s debut album, you will hear ghosts. There’s the presence of his grandmother, an arts patron, whose legacy enriches all his creations. There’s a sister-like figure from his youth, whose sudden passing sparked his lust for life.  And there’s a lingering sting of relationships’ lost promises. The roots-rock artist, however, is not one to lament.  All these apparitions come very much back to life through his music.

More’s previous group had drifted apart in early 2011, despite being booked to play the Joshua Tree Roots Music Festival later that year.  Looking back, More says, “I had this feeling I shouldn’t cancel it.  It gave me a reason to get a new group together.”  The ensemble he assembled for those shows (guitarist José Juan Poyatos, bassist Diego Noyola, drummer Adrien Faunce) would become More’s band.  After the festival the band took to a two-month-long residency in Brazil, where they laid the foundation for “Caddis Moon” and the album’s exquisite title track, “Beautiful Disrepair,” a meditation on mortality.  “That,” he says, “was a turning point.”  Seeking a fresh start, More and band relocated to San Miguel de Allende, a lush colonial enclave in central Mexico.  It’s a second home to him, having visited the city since childhood.  His free-spirited grandmother was an interior-design enthusiast who built a home there in the 1950s.  She collaborated with artisans to create a fabled space that friends and family would visit for years to come.  Art enveloped More.  Classical-piano great Van Cliburn was close to the family.  His bohemian mom was friends with Ron Tomlinson, who taught him to oil-paint and sculpt at age 11.  And his father introduced him to Bob Dylan songs on the guitar.  “What’s cool about San Miguel is that there are a lot of renowned musicians there,” says More, who’d later jam with locals during summer visits.  “There’s a communal aspect to the town. People love collaborating.  I fell in love with that.”

In college, More studied visual art and art history.  He decided to pursue music his sophomore year, after learning that a dear friend, who was like an older sister to him, was terminally ill.  “When we were little, I’d play songs for her.  When we said our goodbyes, I played her a song, too,” he says.  “I realized that to love something and not pursue it…that’s such a waste of this short life we have.”  More began writing songs during a trip to Madrid where he met, and collaborated with, flamenco guitarist (and future bandmate) Poyatos.  He’d continue composing over the years during a somewhat nomadic existence that brought him to Puerto Rico, Brazil, Mexico, and home to Texas.  His travels culminated in a chance meeting with Fagen and his musician-wife Libby Titus, while they vacationed in San Miguel.  After hearing play him live, the couple asked More and bassist Noyola to sit in with Fagen at a local show, then invited them to Woodstock to attend Levon Helm Midnight Ramble concert.  A few months later, Fagen emailed More to say that he’d love to help out with an album.

They recorded full-length LP “Beautiful Disrepair,” and follow-on EP “Shoulder,” working around Fagen’s various projects.  The band would come into the studio with demos, and Fagen built on what he heard.  “Donald is very much about the importance of the first live takes; otherwise you lose the soul,” More says.  “But he’s not big on a kick drum being slightly off, or a harmony being flat.”  His sharp ears dazzled the group.  “We’d start with the lead vocal track, sit at a piano, and he would map out the harmonies,” More recalls.  “Then we’d record it.  When he played it back, we’d be like, ‘Holy shit!’”  This is how More’s ghosts were so vividly resurrected.  The producer likewise expanded their sonic repertoire.  “What’s cool is that no one had an ego about things.  We were four best friends who had the good fortune of having Donald take us under his wing,” More says.  If there is a commonality tying his songs together, it’s an emotional and physical wanderlust.  “Definitely a lot of different places, different dynamics,” he says of his music’s sprawling experiences, wherein he confronts his ghosts to make peace with them.

About The Iceman Special:
The Iceman Special is a 4 piece outfit transplanted from the swamps of Louisiana to New Orleans. They create a sound that resonates with the psych rock community as well as writing songs that explore reggae, funk, melodic pop, prog, and other influences. The bands live shows are notorious for their intensity and their use of innovative and creative visual stimuli while also taking pride in song writing and the delivery of their message. Screeching yet smooth guitars, wandering yet punchy bass lines, synthesizers, driving drum beats, and powerful vocals form a one of kind soundscape.

“They don’t wear their influences on their sleeves, their original songs are too good for that, but the indicators are there. The production is strong and unlike so many bands that are unable to translate their live energy to a record, the Iceman Special gets the job done.” – The Vinyl District

“The band rocks and lays down such fat, solid slabs of rock ‘n’ roll that if they are not careful, the audience can trip on them and fall a long joyous time.” – David Kunian – Curator – New Orleans Jazz Museum and Louisiana State Museum 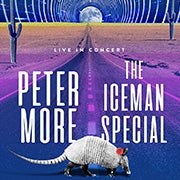