RAM is Haiti’s preeminent band, founded by band leader, Richard Morse. With over 25 years of consistently producing quality music, we've released our 7th album, August 1791 - our second one in 3 years.

Ancient folkloric drums intertwine harmoniously with Punk Rock guitar riffs and swinging Caribbean melodies, led by the entrancing singer, Lunise, all combine for a truly magical experience. The band has consistently gigged at the famed Hotel Oloffson in Port-au-Prince, Haiti since 1990, where the performances are known to take on another dimension. People frequently describe a spiritual sensation when describing a RAM concert. You don’t simply go to a RAM concert, you experience one. 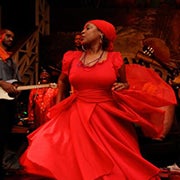