Will Thomas Reed and Sarah White & The New Band

About Will Thomas Reed:

Will Thomas Reed has a lot to say. And he has mostly been saying it through music for the last three decades.

His story starts in his hometown of Charlottesville, Va., home to a bustling music scene, where he played his first gig when he was only 13 at a laser tag arena. Reed worked at Stacy’s Music Shop during his high-school years getting to know the who’s who in the local music scene, while trading stories and licks with some of the best around. He went on to attend East Tennessee State University on a bluegrass scholarship, before leaving school to pursue performing full time.

Reed’s new music blends the passionate sounds of classic American rock-and-roll with his Virginia country roots, creating a refreshing and exciting sound. With sharp witty lyrics and an Elvis swagger, Reed conjures up a classic storyteller, putting listeners inside the narratives of his songs that both take them back and move them forward all at once.

“No matter how many knock-down drag-out fights we get into, music is my true love I will always crawl back to it,” said Reed.

About Sarah White & The New Band:

Sarah White’s musical style is as familiar as it is hard to define - not quite country, not quite rock, not quite folk - but a little bit like all of the above. A chameleon-like performer with ever changing line-ups over the last decade, White has grown into a talented songwriter with a sizable body of poignant, catchy, and moving songs. Backed by a full band including pedal steel, keyboards, and guitars, White closes 2018 with a new album (High Flyer, released August 2018) and a bigger, brighter and accomplished sound.

White grew up on a Christmas tree farm in West Virginia exposed to a world of music via her folks' extensive record collection, ubiquitous music festivals, local music jams, and a songwriting father. Her early albums on the Jagjaguwar label post-University speak to a wide range of influences and a tendency for experiential learning. Deemed back then “a diamond in the rough,” White says that High Flyer is the gem she’s been working toward all these years. As she says, “This one feels like the one I’ve always wanted to make.”

“The connection between White and Matthews is as cosmic as the duet [͚’Sweetheart͛’] suggests." - Billboard

Sarah performs solo and with the band and wields a well-worn Jumbo Gibson acoustic. She has opened for Merle Haggard, Justin Townes Earle, Earl Scruggs, Will Oldham, Dave Matthews Band Caravan and was once named Best Songwriter in her hometown of Charlottesville, the town invented by Thomas Jefferson.

“All of the tracks on High Flyer are classic Sarah White: They’re smart, earthy, honest songs, full of heartbreak that cuts sharp through glittering wit, all a reminder that White is, as she always has been, the coolest gal around.” - C-Ville

Woody Woodworth is a singer-songwriter that hails from Richmond, Virginia. Born and raised in rural Hanover County to a working-class family steeped in a love for music and storytelling, Woodworth took to music at an early age. He was first introduced to the "Grand Ole Opry" through his beloved grandparent's radio. With a family history deeply rooted in the Blue Ridge Mountains and the Shenandoah Valley, Woodworth became intrigued by regional tales woven into bluegrass, folk, and traditional country music; igniting a curiosity in the art of songwriting. His mother, a Southern Rock Baptist Hippie, educated him on sounds from the late 60s and early 70s and introduced him to the likes of Bob Dylan, Neil Young, Townes Van Zandt, and CCR, Lynyrd Skynyrd among many others.

Woodworth began playing guitar and crafting songs of his own around the age of thirteen. He grew as a musician and writer during his time at Hampden-Sydney College where he began to take songwriting seriously. In 2016, Woodworth formed his band Woody Woodworth & The Piners. His songs embody the heart of Americana with haunting melodies of love, loss, and the American spirit.

Woodworth writes of blue-collar lives, evoked through moments that are as simultaneously easy on the ears as they are tough on the heart. Framed within the confines of both small towns and bustling metropolis,’ Woodworth's lyrics paint a picture that honor the past while paying tribute to the beauties found in everyday contemporary life. Over the course of the last year, Woody and his band have played with: Western Centuries, The Way Down Wanderers, The Stray Birds, Frank Solivan and the Dirty Kitchen, The New Schematics, Mountain Heart, and has booked with Capital Ale House Music Hall (Richmond, VA), Ashland Coffee and Tea (Ashland, VA), The Camel (Richmond, VA), Picker's Alley (Fredericksburg, VA), Jammin Java (Vienna, VA), Pearl Street Warehouse (Washington, D.C.) , Tropicalia (Washington D.C.), Roofers Union (Washington, D.C.) and The Branded Saloon (Brooklyn NY). Recently Woody and The Piners traveled to "the birthplace of country music", Bristol, Virginia / Tennessee, to record their first full length album, set to be released in the summer of 2018. 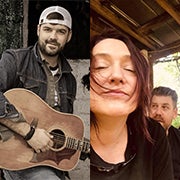