Oliver Wood is a mainstay of modern-day American roots music. The frontman of the Wood Brothers since 2004, he's spent the 21st century blurring the boundaries between folk, gospel, country-soul, and Americana, earning an international audience and a Grammy Award-nomination along the way. Always Smilin,' his debut as a solo artist, continues that tradition while also shining new light on Oliver's sharp songwriting, savvy guitar chops, and a voice that evokes the swagger of a Saturday evening picking party one moment and the solemnity of a Sunday morning gospel service the next.

Longtime fans don't need to worry; Oliver remains fully committed to the Wood Brothers. When the Covid-19 pandemic forced the band to clear its touring schedule and spend most of 2020 at home, though, he began gathering together the solo material he'd been writing with other musicians. Gradually, almost surprisingly, an album began taking shape.

"People would come through Nashville during the year before the pandemic, and I'd set up a co-write or a jam in our studio, just to do some stuff outside of my own band," he explains. "There wasn't an album in mind. I just wanted to be creative. But when the pandemic happened, the songs started building up."

Some songs were created during long-distance recording sessions. Others were tracked in piecemeal fashion, with different musicians adding their contributions on different days. Songs like "Came From Nothing," "Kindness" and "Unbearable Heart" were sparked by the improvisational jam sessions Oliver hosted in Nashville. The Wood Brothers had written their previous album, Kingdom In My Mind, in a similar fashion, allowing concrete songs to emerge from a day's worth of free-form jams, and Oliver was excited to revisit the process. "You'd be surprised at the music you write and the chances you take when there's nothing at stake," he says. "The best art is an accident. You wind up accessing a different part of your brain and trusting your instincts, rather than relying on control. I've learned it would serve you well to be like that in everyday life, especially when you're dealing with stresses and crises."

There was plenty of stress to go around in 2020, but Always Smilin' -- like its title suggests -- is mostly an album of celebration. While "Get the Blues" addresses the struggles of the modern moment, songs like "Roots" and "Molasses" focus on brighter topics, from finding one's center to embracing a simpler way of living. That diversity is reflected throughout the track list: on gospel covers like "The Battle is Over (But the War Goes On)" and "Climbing High Mountains (Tryin' To Get Home)"; on country-soul standouts like "Soul of This Town"; on the tongue-twisting craft of "Kindness." Oliver even makes room for an unlikely percussion instrument -- the chicken coop -- that once played a major role in his pre-Wood Brothers projects.

"Donny McCormick was one of my mentors back in Atlanta," he remembers, referencing the pioneering southern rock drummer from the 1970s band Eric Quincy Tate. "We had a band together called Coop DeVille, and we'd play these blues gigs with Donny playing the chicken coop. He'd kick the side of it, play it with sticks, and drag a drumstick across the slats. It's a real spectacle to watch, but also a very musical instrument. I think of the chicken coop as part of my musical heritage, so I got one for Jano and made sure we used it on the album. It's another bit of my past that I was happy to bring back."

Always Smilin' celebrates the full range of Oliver Wood's musical heritage, from the blues and gospel sounds he explored long before the Wood Brothers' formation to the American roots music he's been making during the past two decades. It's an album of collaborations and communal recordings, spearheaded by a longtime team player who, for the first time ever, is making the final decisions himself. There will be more Wood Brothers music in the future, but this is an album about the present. An album about right now. And right now, Oliver Wood is smiling. 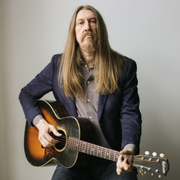