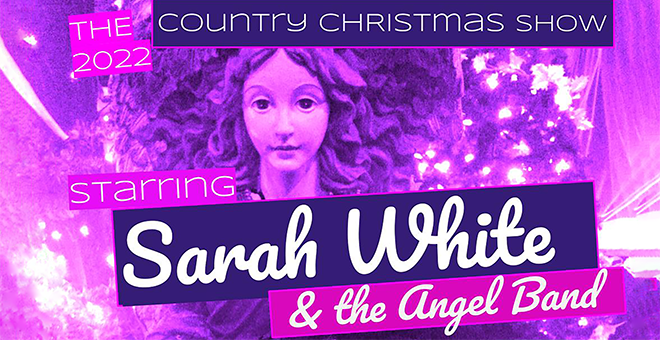 If you’ve been to the show, you know why you go.  The lights. The trees. The songs. The twinkle. The melancholy?  The cookies! Whatever it is, this magical show is a Charlottesville tradition and people count on it like they count on Santa coming down the chimney.

“I'm obsessed with Christmas and everything sparkling," White told the Daily Progress.  "Every year, I'm driving around and picking up tons and tons of new Christmas ornaments for the show.”  Her childhood obsession goes way back. Growing up on a failed Christmas tree farm in hillbilly West Virginia has always left her wanting more, more, more!  That, coupled with my first Dolly Parton album at age 5, sealed my fate, she says. Dolly put it best: "Less is not more; more is more."

Born and raised in the two Virginias, Sarah White’s musical style is as familiar as it is hard to define - not quite country, not quite rock, not quite folk - but a little bit like all of the above. A chameleon-like performer with ever changing line-ups, White has grown into a talented songwriter with a sizable body of poignant, catchy, and moving songs.

White started her career in the late 90’s with two albums of mysterious, lo-fi, experimental folk-rock on the popular Jagjaguwar label. Her 1997 debut All My Skies Are Blue, was a collection of 4-track recordings pressed straight to CD. In 2000 she released her first studio album, the stunningly original Bluebird which The San Francisco Bay Guardian described as:

“A delicately bare and pretty album that ensures the singer-songwriter a place in the company of Cat Power’s Chan Marshall and Edith Frost. Yep, that good.”

“Sarah’s music kills me, beautifully from the ground up, no plastic.” — Dave Matthews

Sarah performs solo and with the band and wields a well-worn Jumbo Gibson acoustic. She has performed with Merle Haggard, Justin Townes Earle, Earl Scruggs, Will Oldham, Dave Matthews Band Caravan and was once named Best Songwriter in her hometown of Charlottesville, Va. 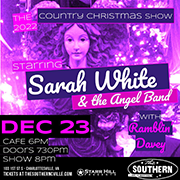