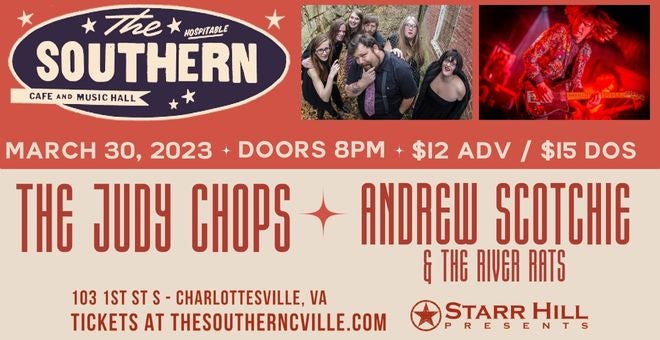 For the past decade The Judy Chops have been wowing audiences with their deft musicianship and high-energy live shows.  This seven piece band comprised of family and friends has evolved from a Shenandoah Valley favorite into one of the hottest acts in the Virginia music scene.  Their unique take on Americana is a fusion of modern and vintage musical styles, blending elements of swing, blues, rock, and soul for a sonic experience Huffington Post calls 'genre-defying!'

Andrew Scotchie & the River Rats have been revered far wide for their engaging, interactive High-Energy, Funk-ti-fied Rock n’ Roll show. Couple the abilities and in the moment spirit of a jam-band with a punk rock fierceness and energy, and you’ll get a show that will have familiar songs but with a twist that offers a listener something only in that moment. Consistent studio recordings, year round touring from NY to FL and NC to ID, earnest songwriting and sharing bills with such greats as Neal Francis, Eric Gales, Futurebirds, Here Come the Mummies, Bob Margolin, Sonny Landreth, Blind Boys of Alabama, Drivin N Cryin, Ghost Light and Bettye Lavette has made Andrew Scotchie & the River Rats one of the industry’s fastest growing Rock n Roll bands, and voted Western North Carolina's best Rock band/all around favorite band since 2015.

More about the band's latest studio release "Everyone Everywhere"...

"...with the group’s latest album, “Everyone Everywhere,” Scotchie & Co. have harnessed the eternal hope and constant growing pains of America — a country still trying to figure itself out with a mirror currently placed firmly in front of itself." - Smoky Mountain News

With two full length releases under his belt, a festival all his own, and his band’s 10 year anniversary approaching, it’s hard to believe that songwriter, guitar prodigy, and event producer Andrew Scotchie hasn’t even hit 30. On his latest studio venture, the Asheville, NC native packs a punch with six new tracks that boast some of the most electrifying arrangements you’ll hear all year.

With heavy themes like corporate greed and inequality prominently featured in the condemnatory track “Funny Money,” more playful tunes like the sweet retro-rock inspired “Natural Romantic” offer listeners a much needed respite from thinking about these turbulent times. An anthem in its own rite, leading single “Stepping Stone” sets the stage for a short yet pungent magical mystery ride of psychedelia, funk, and jam-adjacent rock that is nothing short of enrapturing. The standout “Fear Mongers,” starts with a hardy sample of Charlie Chaplin’s famed “The Great Dictator” speech (which required official approval from the late filmmaker’s rights-holding office in Paris), declaring that “the misery that is now upon us is but the passing of greed” and segues perfectly with Scotchie’s “don’t wait / don’t hesitate / ‘cause the poor man can’t give what the rich man always takes,” artfully encapsulating the current climate.

With such timely social commentary embedded into every track, the new EP could easily be mistaken for a response to the ongoing pandemic, though the album was actually recorded months prior. Still, Scotchie welcomes the serendipity, and encourages his listeners to adopt their own takes on the lyrics, especially when they can be utilized to reclaim hope. Scotchie concludes the album with a universal offering in the title track “Everyone Everywhere,” imploring "Even if you feel lonely / when this world is unkind / call on me, I'm sure you'll find / even when you feel you got nothing / everyone everywhere's got something. 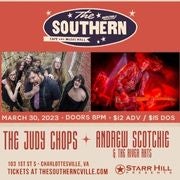