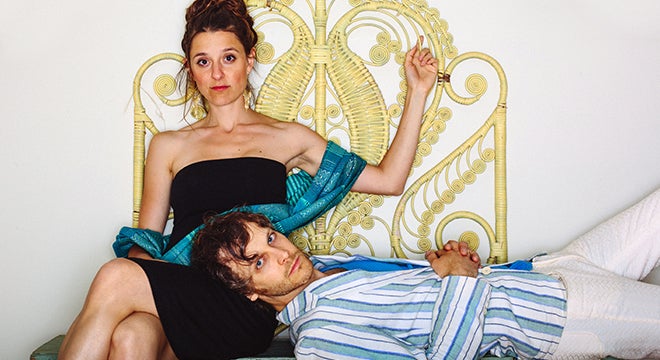 The DWM show on 11/20 is being moved to 11/22. Your original tickets will be honored or you can request a refund from the point of purchase.

"Suz and I started this band as friends," says David Wax, "but now we’re married and have a child and have our family on the road with us. The stakes are different."

Those stakes are what lie at the heart of David Wax Museum's fourth and boldest studio album to date, Guesthouse (to be released October 16 on Thirty Tigers). It's the sound of a band reconciling the accountability of marriage and parenthood with the uncertainty and challenges of life on the road; of coming to terms with the limitations of the "folk" tag that launched their career and pushing past it into uncharted musical territory; of reimagining their entire approach in the studio to capture the magic and the bliss of their live show. In typical David Wax Museum fashion, the songs on Guesthouse are simplistic and sophisticated, elegant and plainspoken all at once. Rather than succumbing to the weight of the newfound responsibilities that landed on their doorstep, the band has leaned into the challenges to capture a brilliant portrait of the messy beauty of it all.

The roots of David Wax Museum stretch back nearly a decade, and all the way from New England to Mexico. As a student at Harvard, Wax began traveling south of the border to study and immerse himself in the country's traditional music and culture. Back in Boston, he met fiddler/singer Suz Slezak, whose love of traditional American and Irish folk music fused with Wax's Mexo-Americana into a singular, energetic blend that captivated audiences and critics alike. Their 2010 breakout performance at the Newport Folk Festival made them the most talked-about band of the weekend, with NPR hailing them as "pure, irresistible joy." They released a trio of albums that earned escalating raves everywhere from SPIN and Entertainment Weekly (who described them as sounding "like Andrew Bird with a Mexican folk bent") to the New York Times and The Guardian (which dubbed the music "global crossover at its best"). They earned an invitation to return to Newport, this time on the main stage, as well as dates supporting The Avett Brothers, The Carolina Chocolate Drops, Buena Vista Social Club, and more.

It was on the road over these past few years as the band and audiences grew, though, that Wax could feel their exuberant live show evolving beyond its formative roots.

"I felt empowered to start the band because of my time in Mexico studying folk music," Wax explains. "In Boston, the term 'Americana' or 'folk' was just this catchall to describe what everyone was doing. It was helpful to use that to talk about our music at first, but we've found that our hearts feel most shaken, and the band fires on all cylinders, when we're putting on a rock show. What we've tried to retain about our folk origins is the warm sound of people playing acoustic instruments together in a room. But, by embracing more of an indie rock approach, we've colored this record with synthesizers, layers of percussion, and adventurous sonic processing. The mental shift of it helped us feel like we could do anything we wanted. There were no rules that we had to follow in terms of what was 'authentic.'"

Part of the inspiration for the shift was the presence of guitarist and producer Josh Kaufman, who sat in with the band on tour and added new sounds and textures that the they'd never experimented with before. When it came time to record Guesthouse, the band knew he had to helm it in the studio.

"The songs entered this Technicolor, 3D world with Josh," explains Wax. "Aside from his contributions to the arrangements, he really wanted us all to be in a room playing the music together live so that the groove would be central. We brought in two other drummers, and there was a real focus on having as much percussion happening at the same time as possible. We gravitate towards that naturally because of the Mexican influences, all of the syncopations and 6/8 dance rhythms and the energy that that gives us, but we really embraced it this time around."

That emphasis on groove sucks you in from the opening seconds of the kickoff track, "Every Time Katie," a whispered come-on that roils and pulses like an anxious heartbeat and features gorgeous call and response vocals from David and Suz. It's followed by "Dark Night Of The Heart," which pushes the sonic envelope further than any previous David Wax Museum track, blending chamber strings, psychedelic vocal filters, explosive drums, and swirling synthesizers.

Written partially in Mexico and partially in western Massachusetts, the lyrics on Guesthouse find Wax writing with more direct, personal honesty than ever before.

"I had felt really reluctant to talk about personal stuff in the past," says Wax. "I was writing personally, but there were lots of things I was obfuscating or filtering through a character to protect myself from putting too much out there. But it got to a point where it was taking a lot more energy than it was worth to maintain that privacy. When we had our daughter, Calliope, it felt like this sudden release because talking and singing about our lives was becoming more and more integral to what we were doing as artists and who we were as people."

The title track, which draws on several traditional Mexican songs for musical inspiration, is a tongue-in-cheek reflection on the life of a traveling musician hunting for a free place to crash, while "Lose Touch With The World" faces down the reality of living a life far removed from that of your friends and family, and young man is an earnest musing on growing older.

"It's about being a parent and coming to terms with what your ambition is," explains Wax. "What part of that is essential to who you are, and what part can you let go of? We have to check in with ourselves and ask what we're doing and why we're doing it more often now because we're not just us putting ourselves through the mental and physical sacrifices of touring anymore," he continues. "Now Calliope is going through it with us, and Suz's dad and my cousin Jordan are going through it with us on the road. And because we're constantly checking and making sure we're doing this for the right reasons, that we feel honest in our hearts about it, I think that's brought new life to what we're doing and a new energy and a new level of commitment."

It's a sentiment brought beautifully to life on "Everything Changes," as Wax and Slezak sing, "Everything changes / when two becomes three." The song was written in response to all of the good-natured warnings about what having a child would mean for the couple, the freedom and sleep and sanity they might lose out on. Instead, they choose to focus on everything they've gained: a beautiful daughter, a stronger bond with their families and fans than ever before, and without a doubt, the most exciting album of their career. For David Wax Museum, the stakes may be higher, but that just means the rewards are even bigger. 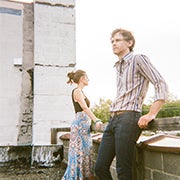