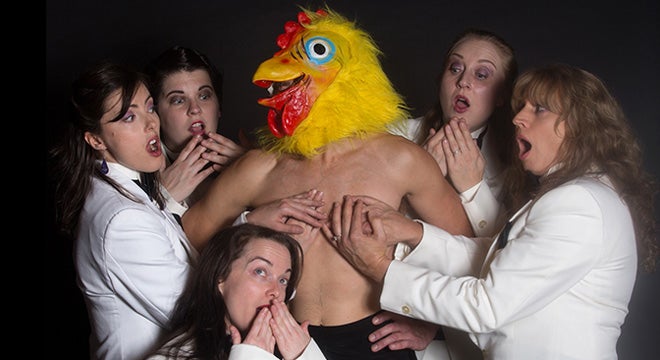 About The Falsies:
Directly following The Falsies’ destructive debut at Live Arts, the so-called "theatrical punk" band somehow had the temerity to ask me, Danny Shea, if they could play the Southern. Given that The Falsies' self-described "crimes against inhumanity" had just earned them a "double lifetime ban" from the theater by its otherwise zenlike goddess and artistic director Bree Luck, I, needless to say, felt duty-bound to also shut down their scheme to wreak lawless creative havoc once more. Later that day however, just before lunch, a surprisingly vigorous hand job in the alley behind the Jefferson changed my mind concerning the viability of their dangerously provocative rock show. What can I say, Lance Brenner has an exceptionally firm grip and even softer hands. But rest assured dear reader, that even though I caved to The Falsies’ demands solely due to their gratification of my basest carnal desires, I still have no qualms about taking all six of them across my knee, if necessary. Regardless of whether or not they are debuting four brand-new songs, or their admittedly sexy “Satan’s Choir” is undulating, cooing and raging behind them, if The Falsies dare commit any illicit shenanigans (no matter how well-intended) on my stage, I’ll personally stop their riot-inciting freak-show and drag every single one of them into my office for a severe tongue lashing. Their Brechtian-style disruptions and their breaking-the-fourth-wall bull-malarkey might be fun for the band and their fans, but I have community standards to maintain and a venue to clean up at the end of the night. Therefore, I decree that Saturday, February 16th 2019 will be an evening of reckoning...The Falsies will conform to social norms or I will permanently end their debaucherous influence on our otherwise virtuous local music scene!

We are the originators of absurdist rock, We were theatrical punk before it was cool. Oh theatrical punk's not a thing yet...well, we're still on the cutting edge then. File also under cock pop, party punk, spunk rock. 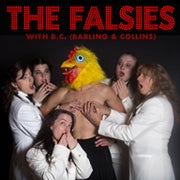